After numerous calls by concerned citizens, Animal Friends has filed reports to the institutions in charge against Milan Anic, owner of the restaurant "Anita" and an improvised Zoo next to the restaurant, on account of the fact that his private Zoo is illegal and that he violates the legal regulations concerning the conditions for keeping animals and animal protection.

According to the reports and photographs made by private persons, the improvised Zoo has during the past ten years housed racoons, storks, ostriches, peacocks, kangaroos (wallabies), monkeys, porcupines, a skunk, ducks, geese, doe, deer, Vietnamese pigs, donkeys, ponies, various birds including parrots, and dogs – two huskies (Siberian wolves) and two pinch terriers... These animals have been living in concrete cages of inadequate size considering the individual species, without proper protection from the weather and no motivating environment. They suffer from lethargy, since their cages are too small to move and they are forced to live in confinement in circumstances that are entirely unnatural. It is also questionable to what extent they are cared about in terms of nutrition and veterinary care. The ostrich cages are the most visible ones since they are placed right next to the road and thus also extremely exposed to traffic noise.

Private persons who have visited the "Anita" restaurant and seen the so-called Zoo are appalled by the conditions in which these animals must live and the fact that Milan Anic acquires more and more exotic animals. They also believe that the institutions in charge have been tolerating the existence of the Zoo simply because Milan Anic is a wealthy man in good relations with the leading men of the city of Zadar and the county. Animal Friends now demands that the institutions should act urgently in order to demonstrate that sanctions equally apply to all who violate the law.

Milan Anic has also asked the visitors of the Zoo to donate in money for animal food. That way he has gained tax-free profit, and he has obviously been using the money for other purposes, since witnesses have seen him feed the animals with the food leftovers from his restaurant, which is low in nutritional values and entirely inadequate for particular species.

According to the statements made by Milan Anic to the media, the Ministry of Agriculture, Fishery, and Rural Development has not issued any permit for opening a Zoo, which means that it is illegal and violates the Animal Protection Act (Art. 51 and Art. 52). Thus, it should be closed down, regardless of the conditions in which the animals live. According to the Animal Protection Act, nobody can open a Zoo without a certificate proving that there are adequate conditions for keeping animals, issued by an institution in charge. Therefore, Animal Friends has asked the Ministry to close down Milan Anic's zoo in accordance with the authority stated in Art. 52 of Animal Protection Act and to organize the transfer of the animals to adequate places.

Owing to the fact that Milan Anic has violated the Ordinance on the Keeping Condition, Methods of Marking, and Documentation of Protected Animal Species in Captivity (Official Gazette 70/09), Animal Friends have also filed charges to the Inspection of Nature Protection.

By scandalizing tourists and Croatian citizens alike and by failing to apply the law and close this improvised animal prison, the authorities create an exceptionally bad image to Croatian tourism and harm Croatia's reputation in general.

Animal Friends is against any form of keeping animals in captivity and consider zoos to be a particularly primitive form of human amusement and profit gain. It is a real shame that improvised animal prizoons such as this one still exist in the 21st century. 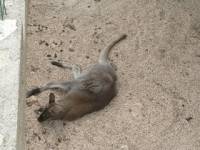