More and more people are opting for a vegan lifestyle because they are aware that this is the way they could do most to save animals, improve their health and preserve the planet whose resources we spend relentlessly for meat production. A vegan lifestyle is in many ways of benefit to the animals, the environment and human health.

With the action 'Rent a Vegan Buddy!' Animal Friends offer support to anyone who wants to become a vegan by providing them with the contact to longtime vegans, so they could profit from their experience.

The Vegan buddies will help people who sign up by being their support, giving them advise and information, going shopping with them or teach them how to cook – all that so the new vegans will have a much easier transition to a new way of life!

Someone who wants to become vegan, faces many unresolved issues. Regardless of whether it is a strange list of ingredients on the product, the new challenges in cooking or parents and friends concerned about your health, your Vegan Buddy can help you!

Animal Friends offers support to anyone who wants to become a vegan by connecting them with longtime vegans so that they can profit from their experience.

How does your Vegan Buddy help you?

Your Vegan Buddy will help you find vegan products, give you advice on how to find vegetarian/vegan restaurants in your vicinity, s/he finds for you the recipes and cookbooks, and is available if you have questions about health. If necessary, you have even the possibility of joint shopping or cooking of vegan meals, and while associating with you s/he will answer all your questions.

Who is the Vegan Buddy for?

It does not matter how old you are and what you do – the Vegan Buddy is for anyone who wants to switch to a vegan diet, regardless of whether the reason is ethical, environmental or health.

People often wonder why they should give up meat and other animal products and which are the advantages of vegetarian and vegan diet. If one wishes to achieve a higher degree of vitality, reduce probability of certain diseases and decrease intake of toxins, which are inevitably present in high quantities in the food of animal origin, maintain the optimum physical fitness and weight, then vegetarianism or, moreover veganism, is just what that person is looking for. Besides, a person who chooses a plant-based diet will spare many animals, but also plants, which are required in large quantities in the meat industry. This contribution may seem insignificant, but as Mahatma Gandhi said, whatever you do may seem insignificant to you, but it is most important that you do it. Because when it is made by many thousands at once, then the difference is obvious. For more or less all the reasons stated I became vegetarian at the age of 14, and vegan at 22, when I finally realised that meat, milk and eggs are morally and ecologically unacceptable. By profession I am an electrician, I photograph nature, love motor raceing, I like to take a bicycle ride on a muddy forest road, and, if an opportunity arises, to drive a rally, and in the meantime I read an occasional book, sleep and cook a bit. 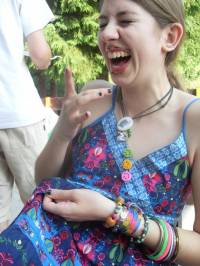 Veganism was the inevitable, logical and natural decision after I allowed myself to open my eyes to the suffering of animals (ab)used for food, clothes, entertainment or for beauty or scientific purposes. I believe that each person should be able to get all the information about the real price of the consumption of animal products and make an honest decision about it. I try to introduce others with the idea of ​​veganism and animal rights because it is closely associated with human rights and ecology, ideologies in which the ethics of compassion toward other species is often ignored. In my free time I read, study grammar, dance to bad music, enter universities and hang out with people and other animals.

My name is Gordana and I work as a clerk (official). I haven't eaten meat for 17 years, and I have been a vegan for the last four years. I love animals, but above all, I respect their lives and their rights. In my spare time I like to read, watch a good movie, take walks in nature, and cook. I decided to become a Vegan Buddy to assist people in their vegan beginnings and show them that it is easy and fun to be vegan. I want to help people so that they could later help the animals.

When I was fifteen I decided to change over to the vegetarian lifestyle, realizing that my eating habits do not match the true nature of man. Growing up with companion animals, watching their inception, growth, and even destruction, encouraged me to make the lifestyle change. Although my family, friends and the media tried to present the process of breeding animals as a normal cycle of life, I didn't give up this new, but so simple mindset and attitude. After three years of vegetarianism I learned about the frightening background of the production stages of products of animal origin. I immediately accepted veganism. Physically and mentally I felt a big shift. Having noticed the positive change, some of my family members joined me... I teach modern dance and lead the dance group branch FDU. I worry about two chickens, a small Japanese rooster and a dog. I love to draw, listen to almost all music genres and to volunteer for the Animal Friends.

I have been a vegan for about six years and veganism was a natural 'next step' after being a long-time vegetarian (from my eighteenth year). There isn't one reason why I became a vegan – veganism is a way of life and ethics, which for me means a steady growth and development forward. In life, I worked a lot of things and am currently working in the field of agronomy. Throughout the life my hobbies have changed and expanded; I have always loved to deal with interior design, make jewelry and decoration, cultivate plants and observe how they live and grow. One of my greatest passions is cycling, my primary and favorite means of transportation. I live with three feline friends who I am (or am trying) to spoil as much as can and with one human friend.

Hi! My name is Jelena and I am 26 years old. I grew up in rural areas and from birth I was in contact with animals. Very early I had the opportunity to realize that all animals, just like humans, have feelings and that every animal has its own personality. Also, I saw how meat, milk and eggs come to my plate. Regularly I had seen hunters and butchers at work. My whole life I spent living with dogs and cats, and when I started to live in an apartment I became a temporary guardian for abandoned and abused dogs. Thanks to Animal Friends I fully became sensible for animal rights and went vegan about three years ago, so I was glad that now I am part of it and can help someone in making it easier to change his or her life and save the lives of others. At the moment I live in an apartment with two dogs, I work in the Animal Friends office and I have to graduate psychology. As your Vegan Buddy I can offer you all my knowledge about veganism and animal rights in a relaxed atmosphere, and since I like various things I am sure we will find something in common :)

My name is Alen, I am 24 years old and I work in the Animal Friends office. I am about to graduate a school for Shiatsu practitioners. I had been a vegetarian for more than five years and I switched to a vegan diet three years ago when I realized that kicking the animal eating habit is not enough so that I could really say that I do not have them on my plate. In my spare time I like reading, listening to music, cooking and, when possible, traveling. I decided to join the project Vegan Buddy in order to share my experience and knowledge with those who need to make the next positive and praiseworthy step in their life. Becoming a vegan is not hard if you really have a desire for it. Help is always appreciated, but why be boring when in the meantime we can have fun :)

Hi! My name is Ivana, I am 24 years old. I am a student at the Faculty of Kinesiology at the University of Zagreb. I became a vegetarian at the age of 16, due to health-related reasons. Soon enough my condition improved, but I realized there was another reason why I was feeling so much better. Not a single living thing was ever again to be killed in my name. I have been actively playing sports all my life, and switching to a vegetarian diet has brought me nothing but positive changes in that respect. After joining Animal Friends, I started to realize that being vegetarian was not enough for me to be able to say I was living a truly violence free existence, so I became a vegan. That was more than two years ago. My free time is usually spent on playing sports; running, swimming, rollerblading, tennis... or just hangin' with my furry friends.