On Saturday, February 5, 2005, Animal Friends' activists will mark 10th anniversary Remembrance Day for British animal rights activist Jill Phipps. The march will set off from our info stand in Gajeva ulica in front of Dubrovnik Hotel where it will also end. Marchers will wear purple ribbons and a picture of Jill Phipps and will march down Gajeva ulica, Teslina, Praska, and across Ban Jelacic Square.

What is the Price of Life?

Jill Phipps campaigned tirelessly for animals in her home town of Coventry and across the United Kingdom. On February 1, 1995, whilst protesting against the export of veal calves from Coventry (Baginton) Airport, she was tragically killed under the wheels of a livestock transporter.

Animal Friends will hold a lecture about Jill Phipps in club Mama (Preradoviceva 18) on Tuesday, February 8, 2005, at 7 P.M. They will talk about her life and her fight against separation of young calves from their mothers so people could drink their milk and one against killing of calves for food, and will also remember other humane victims in animal right movement.

What is the Price of Life??

During last year only, over 50 billions of animals were raised and killed for food. In most cases animals are transported from farms to slaughterhouses where their miserable lives end in fear, stress and pain. Their trip to slaughterhouses, which can last for days and be thousands of miles long, looks like a trip to hell. Stuffed into vehicles pigs, calves, sheep, birds, horses and other farm animals travel, regardless to extreme weather conditions, by trucks, trains and ships from one part of the Europe to the other, from Australia to Middle East or Africa... In overcrowded and too narrow space with no ventilation, no food, no water, no rest...

These kinds of transport are often fatal (European Commission 1993) and totally unnecessary because most of the transported animals are going to be slaughtered when they reach the destination. One of the cruelest is the way of transporting of hundreds of thousands of live cows to Middle East and North Africa. The greatest live exporters are Germany, Ireland and France. From Ireland animals are transported by sea, from Germany by highways and railways to harbors in Italy, France, Slovenia or Croatia where they are boarded on ships...

Jill Phipps was just one of thousands of devoted activists from all over the world who try to end this unnecessary cruelty in the name of profit. Her dedication, love towards all living things and to all life she paid with her own. What was the price of her life?

And what was the price of life of Mike Hill, hunt saboteur killed in 1991; or life of Tom Worby, a 15 year old who was crushed under the wheels of van during foxhunt protest; or life of Vicky Moore who was, during investigation of Spanish Blood Fiestas, near fatally gored by a bull named "Argentino" and after several surgeries and in constant pain died in 2000; or life of Barry Horne who died during his fourth hunger strike trying to pressurize the government to honor their pre-election promise to set up a Royal Commission into the fraudulent 'science' of vivisection.

Animal Friends calls all Croatian media and people to mark February 5, 2005 and learn more about why so many people like Jill devote their lives to fighting for animal rights. 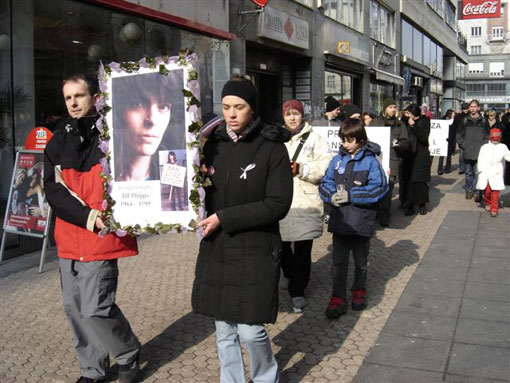