Response of Animal Friends to the inhibition of serving dog meat during the World Football Championship in Korea and Japan. Leaflets will be handed out on Tuesday, January 15, 2002 at 4:40 P.M. on Petar Preradovic Square in Zagreb.

Although we do not agree with the habit of eating dogs in Korea and some other Asian countries, Animal Friends - an organization for the protection of all animals and the promotion of vegetarianism - would like to raise the question if it is morally justified of the Western countries to demand the Koreans to stop serving dog meat during the upcoming World Football Championship.

How can the Western world demand the Koreans to stop eating dog meat when at the same time in the Western countries billions of animals are kept in horrible conditions and bred for human consumption? Are horses, cows, pigs and chickens less than dogs? People divide animals in "animals for human consumption" and "animals for companionship." But one person's gourmet specialty might be another person's friend. Someone who eats a little lamb, chicken or piglet does not have a right to criticize someone else for eating other animal species - in this case dogs - and vice versa.

Korea, the host of the upcoming World Football Championship, is known for its traditional cuisine which, among others, consists of dishes made of dog meat. Western countries are known for their hamburgers. So why aren't the Western countries asked to stop serving beef on the next football championships when the Hindu team will be participating?

It is a paradox that a world organization with such high reputation as FIFA takes part in imposing such decision on Korea, while one of its main sponsors of football matches is McDonald's - a company responsible for the deaths of millions of animals, the destruction of rainforests and the environment and the deterioration of human health. How can it be okay to have McDonald's advertisement during football matches and at the same time moralize over the Koreans eating dogs? There is a saying that expresses this clearly: first clean up your own backyard before complaining about the neighbor's.

Horses get killed too, right? Just like cows, chickens, pigs, sheep, etc. - the list goes on and on. In Croatia, killing ostriches has become business and the killing of chinchillas is increasing. Rabbits, ducks, birds, foxes, bears, wolves and many other species - some of which are endangered - get killed. Dogs are abandoned in dog pounds and (killed) in the numerous shelters - all of this is perceived as normal by the public but "You can not eat them." Animals are tortured in experiments, hunted, mistreated in Zoos, driven crazy in circuses, killed for fur coats or leather products, raised for human consumption and killed for our own pleasures. In absolutely every Western country the economy is based on inhumane, unnatural and abnormal exploitation of animals but they still raise their voice against other cultures and traditions that are as inhumane as their own.

Is it wrong of the Koreans, Chinese or the Philippines to eat dogs and whales? Yes, it is. But it is just as cruel and wrong of the Germans, French, Croats or Americans to eat cows, chickens, pigs, ostriches or rabbits.

Three million Koreans are currently eating dogs. They can stop eating dog meat for the duration of the Football Championship in order to please the West, but does this mean that the people from Western countries will also stop eating other animal species for that period of time? When will the public react with aversion to the serving of pheasants, pigs and geese in various restaurants across Europe and the USA? 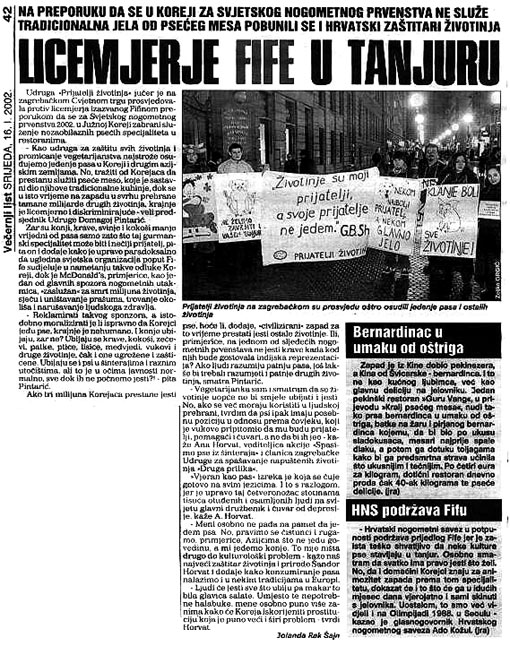