First reactions to the campaign to protect the Adriatic Sea

After Animal Friends Croatia contacted more than hundred coastal towns and municipalities and invited them to place the "Respect life in the sea" signboards on their beaches for the purpose of warning and educating locals, domestic and foreign tourists, as part of the "Respect life in the sea" campaign, the first interested towns and municipalities to respond were the city of Dubrovnik and the municipality of Vela Luka.

Since fishing is prohibited, with an exception of a previously issued and paid license, Animal Friends Croatia want to emphasize the need to take measures to protect our sea, especially due to the large number of tourists who need to be informed about Croatian laws.

Coastal towns and municipalities are able to further engage in the protection of life in our sea, and pursuant to the Regulation on Sport and Recreational Fishing on the Sea (Article 6, paragraph 4) as a local self-government completely prohibit angling and fishing on beaches, another thing that this campaign wants to encourage.

Animal Friends Croatia also invite all other towns and municipalities that were granted a free
pre-press to install educational signboards in their area to prevent violations of the legal provisions and the suffering of fish and other marine inhabitants taken out from the sea by tourists for fun.

"Respect life in the sea" signboards were designed and their pre-press sent by Animal Friends Croatia to coastal towns and municipalities so they could place them on their beaches for the purpose of warning and educating locals, domestic and foreign tourists. It is important that we are aware that we can enjoy beaches and the sea without disturbing their inhabitants, and the message we should send to our children is to observe animals, take care of the cleanliness of their habitat, help a stranded sea animal return to the sea, and not to catch and injure them.

Citizens can also individually help protect and respect of our sea by not taking part in recreational and sport fishing, and by at least reducing fish and sea inhabitants consumption, if not completely eliminating them from their diet.

The Adriatic Sea is in direct danger of extinction due to excessive fishing for human consumption, climate change, as well as pollution and growing tourism. Last year's research published in Scientific Reports points out, "As the increased impact of climate change and the fishery pressure in the Mediterranean Sea is expected, there is a serious risk that this could push the system to a "no return point". Environment and fishing have had a tremendous impact on the Mediterranean Sea, and the biggest decrease in its sea life, up to 50%, has been noted in the Western Mediterranean Sea and the Adriatic!

The "Respect our Sea" campaign, which Animal Friends are carrying out in cooperation with the European umbrella advocacy organization for animal welfare Eurogroup for Animals will continue during the summer by setting up educational billboards and publishing an electronic seafood cookbook. 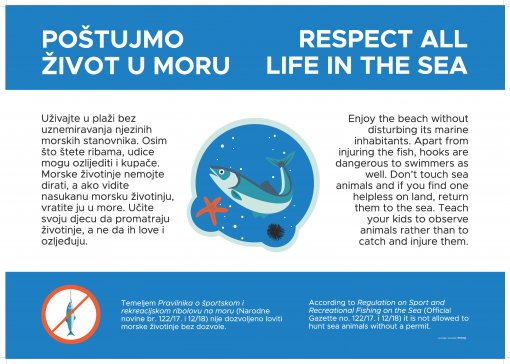