07/08/21 Firefighters: We have witnessed the cruelties of keeping dogs chained!

- Firefighters love animals: They have already participated in the adoption campaign, called for a ban on firecrackers

After the Croatian Mountain Rescue Service, the Croatian Fire Brigade also supported the national campaign "For Croatia without dogs on a chain." The letter, signed by Fire Chief Slavko Tucakovic, states that they support "this commendable initiative which enables dogs, as man's faithful companion and helper, to live a free and dignified life." "Firefighters take part in rescuing people and property as well as animals from various dangerous situations on a daily basis. Unfortunately, in numerous cases, they witnessed cruelties due to which the permanently chained animals were unable to save themselves," stated the Croatian Fire Brigade.

In their letter of support, they point out: “We witnessed this after the massive earthquake that hit the Banovina area at the end of 2020. And while firefighter dogs faithfully helped people on a daily basis, on the other hand, they found chained dogs, tied up and forgotten under the rubble. That is why the Croatian Fire Brigade supports the initiative to change the legislation that would enable dogs to live a more dignified life, as they deserve."

The same experience was shared by animal protection associations who, during the rescue of animals from the floods in Gunja in 2014, encountered horrific scenes of dogs drowning because they were tied to a chain. The same situation was repeated last year after the earthquake, when many dogs were left on chains, without water and food, frightened by both the earthquake and the additional tremors afterward.

It was the associations that witnessed these horrific scenes - the Friends of Čakovec Shelter, the Pobjeda Association and the Animal Friends Croatia Association, with 56 members of the Animal Protection Network and with the support of institutions, who launched the national campaign "For Croatia without chained dogs" aimed at a total legal ban of keeping dogs chained.

Animal Friends Croatia remind us that the Croatian Fire Brigade has been supporting animal protection activities for years: “In the year 2016, firefighters and one female firefighter of the Croatian Fire Brigade participated in our summer campaign 'Family to the seaside, and a dog to the street?!' and under the slogan 'Let's extinguish irresponsibility' called on everyone to adopt animals instead of buying, as well as to put an end to irresponsible behavior towards animals, which is ravaging Croatia through an increase in the abandonment of dogs and cats, especially before going on holiday.”

They add that the Croatian Fire Brigade strongly supported the ban on firecrackers last year. Ljerka Kopričanec Matijevac, head of the School of Firefighting, pointed out that we should say NO to firecrackers and pyrotechnic devices because, in addition to disturbing people and animals, firecrackers are a common cause of fires. Firefighters also have to rescue animals that are frightened by the noise of firecrackers, run away and sneak into inaccessible places, and many are killed.

Associations emphasize that we call dogs man's best friend, and by keeping them on a chain we condemn them to slavery, to live their whole life within a radius of a few meters: "Those who by nature love freedom more than people, whose nature is to run, sniff, explore, are bound 10, 15 years to a chain, exposed to all weather conditions, most often a meager diet, without a bowl of water, forced to defecate in almost the same place where they sleep and eat, hungry for human touch, driven crazy by the chain to the point that they can start showing aggressive behavior.

Therefore, the initiators of the campaign are calling for an urgent amendment to the Animal Protection Act to ban the abuse of dogs by keeping them chained. They thank everyone who has supported this noble goal so far and reminds us that by signing a petition on www.zabranimolanac.net and writing to the authorities, we can literally save many dogs' lives. 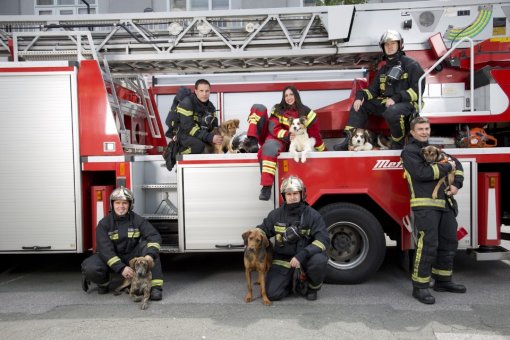