Animal Friends asks that Meatout Day be your day

- Marking the first day of spring by vegan goulash and four events!

Animal Friends invites citizens that on Meatout Day they decide not to buy and not to eat meat, because there is no better occasion than the first day of spring to consider to become vegetarian. Undoubtedly, such decision changes life for the better, gives more vitality, health and also more happiness, because it directly affects preserving environment and saving thousands of animals.

On Meatout Day, which has been marked around the world for over twenty years as symbol of awakening on the first day of spring, Animal Friends prepares vegan goulash and invites citizens to this tasty and healthy meal.

EVENT I: Information stall and tasting of vegan goulash is scheduled for Thursday, March 20, at 12 noon, on the corner of Petar Preradovic Square and Varsavska ulica. New informative leaflet which contains many reasons for switching to vegetarian/vegan food, published for this occasion in cooperation with F.A.R.M. – Farm Animal Reform Movement, organization which founded and started marking Meatout Day, will be presented to the citizens, as well as gratis meat-free meal.

EVENT II: On the same day in Cultural Information Centre, Preradoviceva 5, at 7 P.M., Animal Friends will present the Croatian version of the web site www.futurefood.org. In this context short documentary "Eat This" will be presented, which shows people's attitude towards vegetarianism in an interesting way and the necessity for considering meat-free food.

Web site "Future Food – Meat without Livestock" is a scientifically based site about the food in future, based on foods of non-animal origin and shows present alternatives to animal meat or other products of animal origin and those that are still to come. This web site is published with the aim to bring an end to animal suffering, environmental pollution, starvation and health risks, by no longer using billions of domestic animals as meat, milk and egg machines, and to replace these products with ones which are healthier and are produced via more environmentally friendly and ethical means.

As Easter is coming, Animal Friends warns citizens about the irrational purchase and consumption of eggs, without thinking about the impacts of these cholesterol bombs on human organism and hundreds of thosands of hens imprisoned in cages and turned into martyrs and biological machines.

EVENT III: On Friday, March 21, beginning at 6 P.M. on King Tomislav Square, Animal Friends will publicly present on screen the cruel truth of battery farmed hens and killing of newborn male chicks in the meat and egg industry.

EVENT IV: As eggs are harmful in human nutrition and are not necessary for making various delicacies, on Saturday, March 22 at 12 noon, Animal Friends organizes tasting of vegan cakes and pancakes at information stall on the corner of Petar Preradovic Square and Varsavska ulica.

Since animals are our victims for 365 days per year, raised and killed for human food, by spending just one day in a year without meat – Meatout Day – we will express respect to the victims who sacrifice themselves because of our lousy way of living and faulty reasoning. Let the coming spring motivate us to conscientious and sustainable way of nourishment. 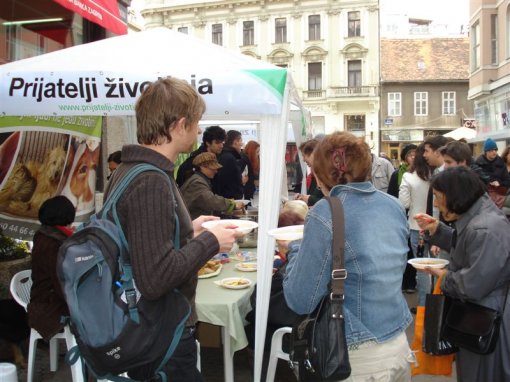