The primitive custom of "kolinje" starts off every winter on the last weekend in September. Home slaughter or "kolinje" always results with hundreds of thousands of backyards soaked with blood and many cases of Trichinellosis. The process of slaughter is the most brutal act in a relationship between man and animal, hence in the time of home slaughter it is considered to be a great part of Croatian tradition and an opportunity for party and folk entertainment on everybody's shame.

Since January 1, 2007 with the enforcement of the new Animal Protection Act, pigs may only be slaughtered if it is stunned before slaughter, (Article 17, paragraph 1 and Article 19, paragraph 3). Penal provisions for those who break the law are from 10,000 to 15,000 kuna.

Animal Friends retains that in Croatia a legal control should regulate that animal stunning and slaughtering should exclusively be performed by a professional person according to the European Union directions. Animal Friends also reminds the citizens to stick to the regulations about animal protection and to stun pigs before slaughter, for the animals' sake, as doing so their pain can be alleviated, but also to respect the law and the penal provisions regulated by law.

In order to show the repulsive custom of home slaughter, Animal Friends will gather in Osijek on The Freedom Square on November 27 at 12 noon, where one of the activists will be "slaughtered and hanged upside down so as to bleed to death."

Citizens should leave the stunning and slaughtering up to professionals, and doing so respect the hygiene standards and avoid Trichinellosis in people's plates. Further law modifications according and notwithstanding with the EU directions are expected to demand animal stunning performed by a professional.

Animal Friends wants to send a message to the Croatian people that home slaughter isn't fun or a valuable tradition, and that they should not pass on such shameful cultural heritage to their children. There is no such thing as humane slaughter; an ethically conscious society and individuals are those who aspire towards compassion and a non-violent diet.

By changing our eating habits into a meatless diet we do not have to be a cause for numerous cries of dying animals any more and consume their remains, but we turn ourselves towards compassion, protection of the environment and our own health.

Pigs are sensible and sensitive animals, and as intelligent as dogs. When slaughtered, their throats are slit and they are left to bleed to death while fully conscious. With a nervous system almost identical to humans, pigs are aware of the knife and feel intensive pain just as human. When we become indifferent to suffering of other creatures and loose respect for life of an animal, we also loose respect for life of a man.

Therefore Animal Friends invites citizens not to take part in the slaughter of live beings but to think about switching into ethically and ecologically acceptable diet, which is also a much healthier choice. 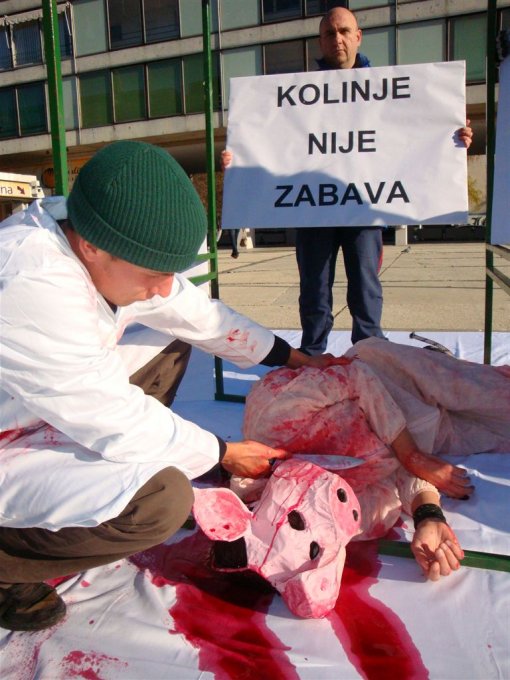 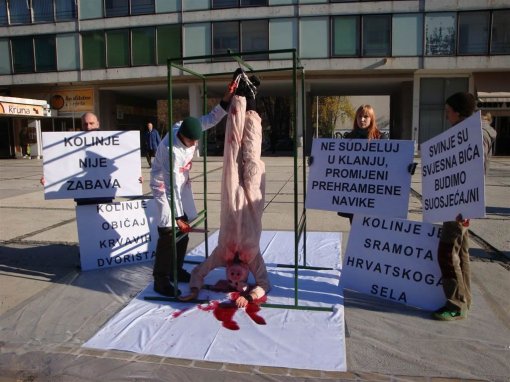