Join us on the International Anti Fur Demo in Sarajevo

Organized departure to the anti-fur demo in Sarajevo!

We invite you to an organized departure by bus to the international anti-fur demo in Sarajevo which will take place on Saturday, January 30, 2010 at 12 noon.

The bus leaves from Zagreb in the night from Friday, January 29 to Saturday 30, at midnight in front of Vatroslav Lisinski Concert Hall. We will be stopping in Slavonski Brod at 2:30 A.M., from where we will continue to Sarajevo, where we plan to arrive after 7 A.M.

From the arrival to 11 A.M. free time is provided. We meet at 11 o'clock to prepare for the demonstration that starts at exactly 12 noon.

From the end of the demo and up to 5 P.M. (when we departure for Zagreb) socializing with other activists from Sarajevo and the rest of Bosnia and Hercegovina, Slovenia, Serbia, and the Czech Republic is possible or free time is provided.

On our way back, we plan to arrive in Slavonski Brod after 9 P.M., and in Zagreb after 11 P.M.

By joining the anti-fur demo in Sarajevo you give support to organizations and individuals who fight against the killing of animals for their fur and join compassionate citizens who want to change the way we treat other, non-human, animals. Also, you have a chance to meet like-minded people from different parts of Croatia, Serbia, Slovenia, Austria and the Czech Republic, as well as the activists from Sarajevo, a city for which it is told that it has a soul. Join us!

Every participant covers a travel fee of 120 kn (some 17 Euros), while the rest of the expenses are covered by Animal Friends. That means that the fee per person is 120 kn, but we are grateful for larger donations - if you are able.

Please fill in the application form and don’t miss meeting fellow activists and a chance to raise your voice against the killing animals for fur in a protest march with the help of drums, megaphones, banners and whistles! The animal rights movement knows no borders!

Minors have to have a written parent permission to go to the demo. 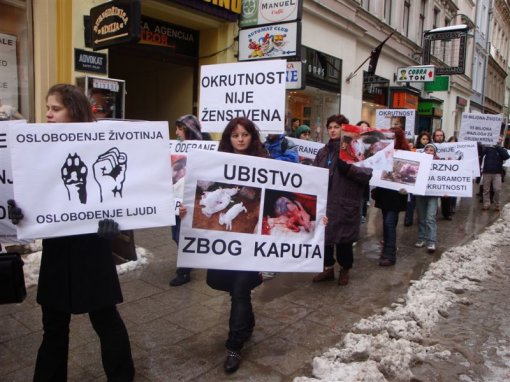