In Croatia there are more than 150,000 vegetarians, while according to the latest public survey 86 percent of the Croatian citizens support vegetarianism, while almost 30 percent of them said they could become vegetarians. The development of the vegetarian movement is even stronger in other European countries.

This year Animal Friends will mark World Vegetarian Day by holding a whole-day info stall on King Tomislav Square, where Zagreb's people will be informed about the advantages of a vegetarian diet for their health, environment and animals. They can convince themselves that foods of plant origin are indeed delicious at 12 noon during the tasting of vegan cheese and cream.

On the stall there will also be a promotion of the music video "Why Must We Eat The Animals? (Oh Why Oh Why?)," which can be seen at Animal Friends' Youtube channel www.youtube.com/afcroatia as well. It is the work of L.A. musicians Greg Cipes and Jah Sun, a project of the web site www.OhWhyOhWhy.org whose mission is the promotion of vegetarianism through multi-media.

Organized by Farm Animal Rights Movement (FARM), World Farm Animals Day is marked on the birthday of the vegetarian Mahatma Gandhi in order to bring attention to the suffering of more than 50 billion cows, pigs, chicken and other sentient beings which are being killed each year on farms and in slaughterhouses around the world. On this day Animal Friends wants to make the suffering and slavery of animals visible who are institutionally abused and slaughtered en masse.

Curious and conscientious people can on the all-day stall on King Tomislav Square from 11 A.M. peek through small holes on a tent to see the lives of the most deprived animals in Croatia. The short footage "Croatian Invisible Animals," which can also be seen at www.nevidljive-zivotinje.com, in only five minutes unveils the state of the farms and households in Croatia, exposing the truth we do not want to see.

The footage sends a clear message about the necessity of reconsidering our prejudices against other animal species, about which Donald Watson, the co-founder of the Vegan Movement in England in the 1940s, believed said: "We can see quite plainly that our present civilisation is built on the exploitation of animals, just as past civilisations were built on the exploitation of slaves…"

The City of Zagreb traditionally organizes the marking of World Animal Day, which will also this year take place at the Zagreb lake Bundek. Animal Friends will join other associations by inviting people not to buy animals but instead home those who are abandoned. The visitors will be able to enjoy an all-day program on the stage, while at the Animal Friends' stall they can get various free videos and printed info materials about all aspects of animal protection and rights and sign current petitions like the one for the urgent reform of the veterinary inspection.

On the very World Animal Day, after the info stall on King Tomislav Square, where Animal Friends will appeal to the people to buy only products which are not tested on animals and hand out the so-called White List, everyone is invited to the intriguing and impressive lecture "Tale of a Happy Cow and a Carefree Calf" by Vedran Romac. This lecture, which leaves no one indifferent, will be held at 7:30 P.M. in Zagreb's club Mama, Preradoviceva 18.

Animal Friends, respectively World Animal Day ambassador for Croatia Ivana Surjan, invites people, media, institutions and associations to mark this day. That can be done by personal engagement in animal protection and rights, i.e. making at least one change which will result in better status of sentient beings with whom we share this planet. 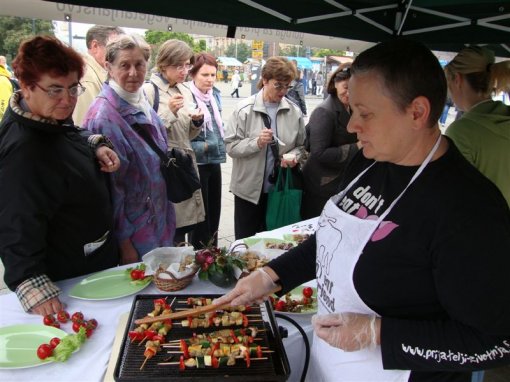