05/21/11 Fruits and Vegetables Against Obesity

- More than 60% of Croatians are obese; get healthy and slim on a plant-based diet

It is estimated that more than a half of European citizens are overweight or obese, which has negative side-effects on their self-image and self-confidence and can be extremely dangerous for one's health.

The European Obesity Day is marked to help and support overweight citizens and to motivate them to change their eating habits and lifestyle to boost their health and quality of life. Obesity has reached massive proportions and has become the leading cause of illness and death in Europe. The solution is to adopt a helathier lifestyle and eating habits.

According to the World Health Organization, 90% of Croatia's population eats less fruits and vegetables than recommended and Croatia holds 9th place of the world's fattest countries with 61.4% of obese citizens.

To mark the European Obesity Day, the Animal Friends will hold a plant-based foods tasting on Saturday, May 21 at 10 A.M. on Trg kralja Tomislava. A healthy food workshop will also be organized. Some of Croatia's plant-based food manufacturers and eco fruit and vegetable farmers will present their products that will be available for the citizens to taste.

In this project the Animal Friends collaborates with the City Department of Health, Labor, Social Security and Veterans of the City of Zagreb that will organize educational actions on the importance of health on several locations in Zagreb the same day.

Department of Public Health Dr. Andrija Stampar announced that every other citizen dies of cardiovascular diseases. Those diseases can be prevented to a large degree by changing eating habits. Meat raises cholesterol levels, as well as the risk of some types of cancer, diabetes and obesity. Research has shown that a plant-based diet can be very effective in losing extra pounds.

Apart from that, a diet without any animal ingredients improves health conditions of people with diabetes and hypertension. Moreover, a plant-based diet is low in saturated fatty acids and has no cholesterol of animal origin whatsoever.

To help improve citizens' health and to reduce obesity figures by switching to a plant-based diet at least one day a week, Animal Friends, sponsored by the City of Zagreb, started a campaign Green Monday. More information and an application for recipes can be found on www.zeleni-ponedjeljak.com.

Animal Friends encourages citizens to switch to a plant-based diet for their health, to maintain a moderate weight and to save the environment. 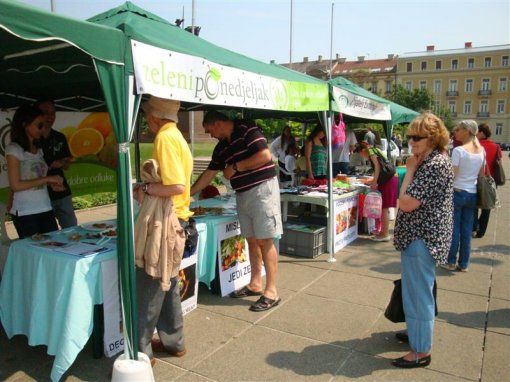