- August, 23 at Trg bana Jelacica: Carrotsy and Peasy will announce the two-day festival of sustainable living

On Friday, August 23, starting at 11:00 A.M., Animal Friends will hand out hempburghers at Trg ban Jelacica to those who show up first at the association’s info-stall. Besides the hempburghers, we will distribute vegan ice cream, all in order to announce the many interesting events expected at the ZeGeVege Festival of Sustainable Living, which will take place at the same location two weeks later, namely on September 6-7, 2013, with a rich program on stage and around it.

Vanilla flavoured vegetal ice cream and hempburghers will be distributed by the mascots of ZeGeVege festival, Carrotsy and Peasy, who will invite everyone to enjoy the excellent atmosphere of the ZeGeVege on September 6-7, with its varied offers and useful information on sustainable lifestyle.

The sixth edition of ZeGeVege will present more than 70 local and international exhibitors of health food, eco-products and cosmetics that have not been tested on animals, as well as an entertaining program on stage with more than 25 performers, two restaurants, numerous tastings, tombola, promotions, free hairdo and makeup, a children’s corner, and other events.

Another novelty is an additional program behind the stage, which will consist of cooking workshops, presentations, short lectures, video screenings, and various other educational events.

The aim of ZeGeVege Festival is to assist people in using the vital natural resources in a sustainable way, without destroying the environment and threatening the lives of animals or the benefit of other people. The ZeGeVege Festival is unique in Croatia as it exhibits and promotes exclusively vegetal and environment-friendly products.

ZeGeVege Festival will take place as part of Veganmania, a famous international festival that has been taking place for years in Austria, Germany, and Switzerland. ZeGeVege is also associated with the Green Monday campaign, which aims to raise public awareness about the impact of nutrition on health and the environment, and has been steadily gaining public popularity and esteem in public institutions.

This two-day ZeGeVege Festival, which will take place on Trg bana Jelacica on Friday, September 6 (9:00 A.M. - 9:00 P.M.) and Saturday, September 7 (9:00 A.M. - 5:00 P.M.), will offer even more attractive events and once again justify its status as a cheerful and popular festival dedicated to healthy and sustainable living that benefits humans, animals, and the environment. 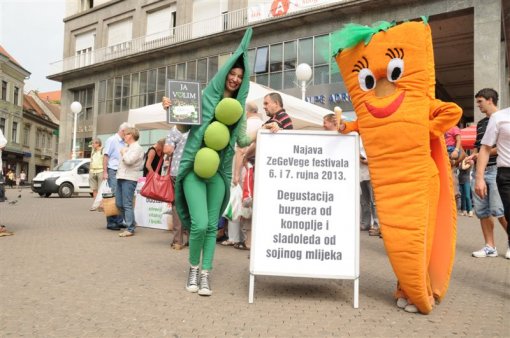