Fur Farming - The Case Of The Netherlands

The Netherlands is an example of a country in which mink farmers tried to overturn the ban on fur farming by suing the country. However, the National Court of Appeals in The Hague reaffirmed the ban in November 2015. With it's position that the economical interest of fur farmers is less important than the public interest, the Netherlands has set a good example to the rest of Europe.

The verdict, among other things, states: "As appears from what has been stated on the legal precedents of the Law so far (…) the mink farmers had to take into consideration that there would come a time when their activities would be prohibited. (…) this motion did not concern animal welfare as such, but the notion that it is ethically not acceptable to keep animals for the production of fur."

The Netherlands is the fourth-largest producer of mink fur in the world. There are around 160 fur farms in the country, raising approximately 6 million minks per year.

In November 2015, the Intergroup on Welfare and Conservation of Animals met to discuss fur farming in the EU. The meeting also included the launch of the new report, "The Case Against Fur Factory Farming – A Scientific Review of Animal Welfare Standards and 'WelFur'", commissioned by animal liberation group Respect for Animals. The report concluded that the only solution for serious animal welfare issues present in the fur industry is to ban fur farming.

Inez Staarink, Dutch Parliament's Policy Advisor on Agriculture, Nature, Animals and Food, recommended the MEPs to support bans in the Member States and to prohibit the expansion of fur farms: "We should not export fur, we should export bans on fur farming".

Fur farming is a politically and economically unstable industry, and the majority of the EU citizens is strongly opposed to it. The Dutch verdict reaffirms that we live in a time when the animals' interests and needs come before those of the industry as well as it makes it quite clear that extreme cruelty towards animals is no longer accepted.

- The Netherlands banned the keeping of foxes for fur in 1995.

- The keeping of chinchillas for fur was banned in the Netherlands in 1997, due to inabillity to achieve adequate conditions for the welfare of farm animals.

- On 4 October 2006, MP Krista van Velzen submitted a proposed bill aimed at the prohibition of fur farming. The bill was based on the ethical notion that it is morally wrong to farm and kill animals solely for the purpose of fur production.

- On 15 January 2013, the law for the prohibition of fur farming came into effect. The law includes a phase-out period of 11 years (by 1 January 2024) to compensate the mink farmers for the financial damage caused by the ban and to enable them to earn back their investments. The law furthermore includes accompanying measures to offer compensation for financial loss due to demolition costs, reinvestments, as well as adversely affected pension provision.

- After a legal challenge of the Dutch Federation of Fur Holders, on 21 May 2014 the District Court of The Hague dismissed the ban and ruled in favour of the farmers.

- After an appeal of the Dutch state, in November 2015 the National Court of Appeals ruled the new legislation does take the interest of fur farmers sufficiently into account because of the 11-year changeover period. Besides, the court states that the accompanying measures should be considered as a form of compensation.

The rationale of the Court's ruling states that ECHR jurisprudence shows the loss of future income, which the mink farmers said they would endure during the phase-out period, is not protected by article 1 of the Protocol 1 of the European Convention on Human Rights, and adds: "It cannot have escaped the mink farmers’ attention that the wearing of fur and the keeping of animals for fur production has been considered to be unethical by a large part of Dutch society for a long time."

The consequences of the National Court of Appeals' ruling from the November, 2015

Besides reaffirming the fur farming ban in the Netherlands, this ruling also means that all potential expansions of existing mink farms carried out since the ban are now illegal, with the exception of farmers who had gotten their permits by 1 January 2014. In effect that means that farmers can no longer expand their farms nor the number of minks. Fur farming will be completely forbidden on 1 January 2024.

The possibility of a lawsuit of Dutch farmers?

Since the ruling of the Court of Appeals is based on the European Convention on Human Rights (to which the mink farmers referred) as well as on ECHR jurisprudence, it is unlikely the verdict will be overruled by the Supreme Court.

The European Court of Human Rights

Some Dutch fur farmers have announced they would take the case all the way to European Court of Human Rights.

Conditions of the applicant to lodge a complaint to the ECHR are as follows:
1) All remedies must have been used in the State concerned (the Supreme Court in this case).
2) The complaint must be submitted within six months from the date of the final decision at domestic level.
3) The complaint must relate to one of the rights set out in the European Convention on Human Rights.
4) The applicant to the ECHR must prove that they have suffered "significant disadvantage".

Since the Court of Appeals considers the transitional period and accompanying measures as fair compensation, the claim for "significant disadvantage" as well as the possibility of a lawsuit are therefore unfounded. 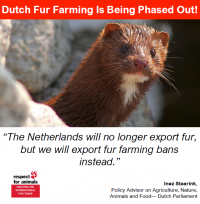