Encouraged by daily intensive communication with cities and municipalities about the care of abandoned animals, Animal Friends Croatia designed and printed an educational brochure on the implementation of the Animal Protection Act. The visually attractive, well-designed, and clear brochure with specific explanations of legal obligations and useful advice aims to help cities and municipalities implement and enforce their legal obligations more effectively. It will be sent to the addresses of all local and regional self-government units and the Internet version will be available to all interested parties.

"We want to help cities and municipalities cope with the challenges posed by the implementation of the Animal Welfare Act. In the 35-page brochure, we have clearly and concisely stated all the ways in which cities and municipalities can prevent the emergence of abandoned animals by implementing legal obligations with regulations they bring in their jurisdiction and education. We shared our experience in encouraging the implementation of the Law and showed good examples on how to prevent irresponsibility of citizens which causes suffering to animals and the whole community," said Luka Oman, president of Animal Friends Croatia and special adviser to the minister of agriculture.

He states that the encouragement for the making of the brochure was the interest of representatives who showed a desire to act to prevent irresponsible behavior of citizens towards pets and sought advice on how to do so. "We put emphasis on preventing and solving the causes of the problem and using good legal tools such as controlling the microchipping of dogs, as well as subsidizing castration. We dedicated part of the brochure to the system of shelters for abandoned animals in Croatia and encouraging the construction of new ones", adds Ivana Lunka, lawyer of Animal Friends Croatia and coordinator of the Animal Protection Network whose associations contributed to the design of the brochure with their field experiences.

The associations say that they are aware of the many obligations of local self-government units, but point out that the Animal Protection Act gives them the opportunity to deal more effectively with the efforts of caring for abandoned animals abandoned by irresponsible citizens. The tools provided by this Law can significantly reduce the financial expenditures of cities and municipalities if they apply them and include them in their general acts: “The purpose of this educational brochure is to point out the causes of the problem, namely dogs and abandonment of animals. Its purpose is also showing the local government ways to prevent this.“

Animal Friends Croatia and more than 50 associations of the Animal Welfare Network reminded in the local community brochure that the Animal Protection Act offers them an excellent mechanism for reducing the number of abandoned animals, which is prescribing mandatory permanent sterilization in their area with evidenced exceptions. In addition, cities and municipalities can (co)finance the castration of dogs and cats in the care of their citizens. They are also advised to regularly control the microchipping of dogs, which can effectively reduce the number of abandoned dogs, especially those that must be cared for in the shelter at their own expense. The cost-effectiveness of these legal tools is confirmed by the examples of those cities and municipalities that have achieved excellent results and proved that, with sufficient effort, the number of abandoned animals can be reduced.

The Animal Protection Network and Animal Friends Croatia would like to thank the Croatian Community of Municipalities, the Croatian Community of Counties, and the Association of Cities in the Republic of Croatia for their support in creating this unique brochure. They believe that the brochure, with this concrete, verified and feasible steps, will greatly help cities and municipalities in implementing the Animal Welfare Act. 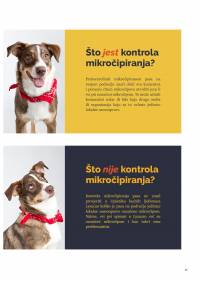