- Associations are the only ones operating in some areas, although this is a legal obligation of the local community

We all know that due to irresponsible citizens and non-implementation of the Animal Protection Act, many parts of Croatia have major problems with abandoning animals. "When someone finds an abandoned dog or cat, they immediately call one of the animal protection associations that fight fires when it comes to numerous cases of abandoning animals, although they have no legal obligation to take care of abandoned animals, but do so out of compassion and love," Animal Friends Croatia say, who coordinate more than 50 animal protection associations in Croatia through the Animal Protection Network project. The network advocates the adoption of dogs and cats instead of buying animals, responsible custody that includes microchipping, castration and good housing conditions, and greater protection of animals in general.

"It was founded in 2008 with the intention of uniting animal welfare associations, which share the fundamental principle of the Network, for the same goal of working together to reduce the number of abandoned and abused animals," Animal Friends Croatia say and also add that the Network is recognized by many institutions, including the Ministry of Agriculture.

The Animal Protection Network and all association members are one of the initiators of the campaign "For Croatia without dogs on a chain" and an initiative calling for an urgent amendment of the Animal Protection Act with the aim of completely banning keeping dogs on a chain. "We demand an urgent amendment to the Law on Animal Protection. We want to finally stop the abusiveness towards dogs, whose keeping on a leash creates enormous mental and physical suffering ", state the associations of the Network and call for the signing of petitions on www.zabranimolanac.net.

The recent 26th meeting of the Animal Welfare Network discussed new moves that would lead to a ban on keeping dogs on a chain, encouraging the local community to implement the Animal Welfare Act, registering new shelters and neutering programs for dogs and cats. They also commented on the great help to the association and volunteers in the earthquake-affected areas, where they are still active, inviting all citizens from that area to take advantage of free vaccination and microchipping of dogs and to apply for castration of dogs and cats.

The coordinator of the Animal Protection Network, Koraljka Petrinović, emphasizes the importance of the work of the association, which in some areas are the only ones implementing the Animal Protection Act, although the obligation is very clearly prescribed to local communities. The burden they often bear is extremely heavy and they need the support of citizens to survive.

The network wants to show the common problems of the association to the public and find solutions that will affect the causes of the problems and prevent the exhaustion of the association and the daily abuse and abandonment of animals. The work of the Animal Protection Network can be supported by payment to the bank account: HR9524020061500072860. Recently, as a sign of support, Erste Bank also enabled the payment of a donation through the Keks Pay application, so that everyone who wants to provide assistance can do so quickly, safely and free of charge. You can also use the QR code, which directly leads to the payment of donations according to your wishes and possibilities.

With gratitude for every donation and other kinds of support, the Network invites you to visit their website www.mreza-za-zastitu-zivotinja.com, which is full of useful information. 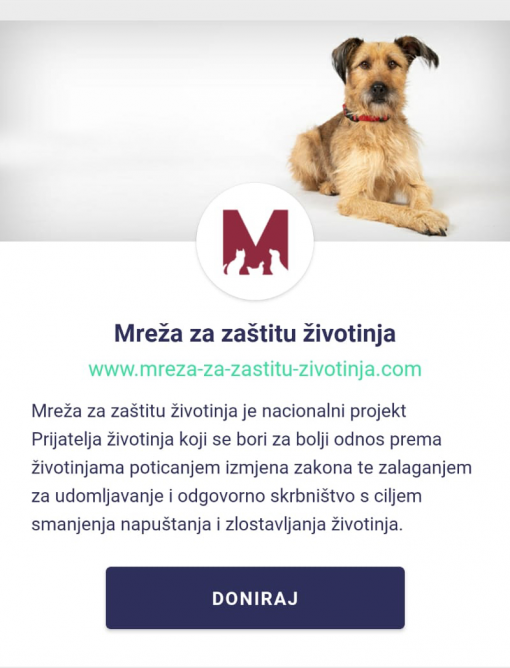