Despite many alternative methods already used for the testing of 8,000 cosmetics ingredients that are already proved safe and which freely enter the market, Procter & Gamble (P&G) continues with the horrible tests on animals for the sake of profit. P&G, with more than 250 brands, is responsible for the tormenting and death of thousands of animals per year on whom it tests cosmetics, cleansers and companion animals' food.

To point a finger at the unethical practice of this multinational company, Animal Friends will, during the pre-election silence, on Saturday, May 16, invite citizens not to remain silent to the suffering of animals but to boycott all P&G products as well as the products of other companies that experiment on animals.

On the Global Boycot P&G Day, activists of Animal Friends will hand out the latest "Black & White List" of companies which do and those who do not test their products and ingredients on animals at the information stall in Varsavska ulica near Petar Preradovic Square in Zagreb. On the same day, the information stall of the Animal Friends will also be set in the center of Dugo Selo as well.

As a member of The European Coalition to End Animal Experiments (ECEAE), Animal Friends also represents Humane Cosmetics Standard – HCS. The companies that comply with the HCS agreed to perform regular revisions in order to prove that in their businesses, they do not tolerate the abuse of animals, nor their torturing and killing for the purpose of testing ingredients and final products. The companies that comply with the HCS and whose products are available on the Croatian market are specially marked on the "White List." Those interested in finding out more information can visit www.hr.eceae.org.

In the unethical experiments, various chemicals are poured in animals' eyes and on their shaved backs. Animal experimentation victims are placed in restraining devices and sometimes break their necks or backs attempting to escape the pain. Those who survive are used in additional painful tests, until they are eventually killed. The most common reactions are swelling, blindness, redness, infections, poisoning of internal organs, convulsions, vomiting, paralysis and various types of bleeding - from the nose, eyes and mouth, and painful death in agony. P&G "scientists" often do not sedate the animals or give them pain killers.

Procter & Gamble spends millions of dollars to package itself as a responsible, caring company, and claims to be a leader in the development of alternatives to the use of animals in product testing. But the facts of P&G's priorities seem clear: in less than 5 days, P&G spends more on advertising than it claims to have spent in 14 years on alternatives to painful and lethal animal tests.

The Croatian Animal Protection Act prohibits the research or development of chemical products used for the cleaning and disinfection of articles of general use and the research or development of ingredients, combinations of ingredients and finished cosmetic products. Denmark and Sweden have banned selling cosmetics that contain ingredients tested on animals, a ban which should come to effect in the EU in the year 2013.

On the Global Boycott P&G Day, Animal Friends will invite citizens to become conscious consumers and not to buy products from companies that still did not reject and condemn animal experiments. By choosing the products that – as their ingredients – are not tested on animals, one does not take part in cruelty to animals and shows to P&G and other unethical producers that the torture and slaughter of animals for profit will no longer be tolerated. 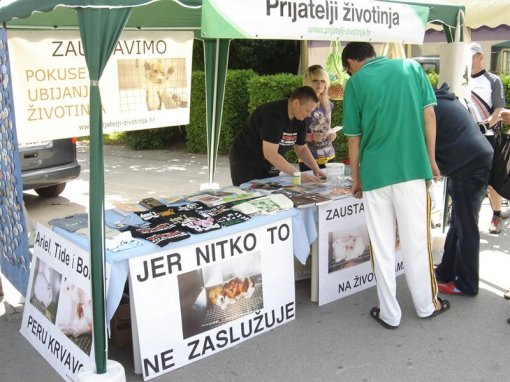