World Vegan Day is celebrated throughout the world. It was started in 1994 by Louise Wallis, who was president of the British Vegan Society at that time, in order to draw attention to being compassionate toward animals and promoting ethical, health and ecological aspects of veganism. The vegan diet consists exclusively of foods from plant origin and is rich in various flavours and fragrances. It is richer and healthier than the usual European diet, and you can enjoy the same dishes and flavours that we are used to through vegetarian version of traditional dishes.

To go along with this year's World Vegan Day, on Saturday November 2, 2013 at 11 A.M. on Trg bana Jelacica in Zagreb, Animal Friends is organizing the making of a famous Danube Waves cake shaped as a large letter V, which does not contain milk or eggs but it is made completely from plant origin and therefore also healthier. After the skilful cooks from Vegehop club make the cake and spread over the final layer of chocolate, citizens will be able to taste it.

There will be prizes for those who come nearest to guessing all the ingredients of the cake, and guessing will be made easier by displaying some ingredients. There will be gifts on Trg bana Jelacica for those who applied for a Veggie Challenge and successfully spent the last month on vegan diet. They will be sharing their experience with anyone who is interested.

At the Animal Friends stall there will be a petition for implementing veggie meals in public institutions, and there will also be recipes for vegan cakes and savoury dishes made out of ingredients from plant origin available.

As Halloween approaches and with it the time to watch horror movies, Animal Friends calls upon everyone to watch the ten minute horror called "From Farm to Fridge" on www.youtube.com/afcroatia or www.prijatelji-zivotinja.hr. This film is different from other movies because it shows the truth behind closed doors of farms and slaughterhouses, and it is happening without pause every second of every day and even right at this very moment. The video has been produced by Mercy for Animals with actor James Cromwell as the narrator, and it uncovers everything animals go through and what everyone can do in order to help them.

Due to the habit of consuming meat, milk and eggs, people are exploiting and killing animals without reason. World Vegan Day invites everyone to mark this day by enjoying food of plant origin with their family members, friends and colleagues and to get informed about veganism. As well as achieving vitality and many health advantages, changing to a vegan diet is becoming a question of general sustainability considering that exploiting animals for food is connected with a huge use of natural resources, world hunger and cataclysmic destruction of the environment.

Those who choose a vegan way of life also do not wear footwear and clothes made out of animal skin, fur, wool, silk and feathers, they use cosmetic products and cleaning materials that have not been tested on animals, do not visit circuses that have animal shows or zoos, and do not buy animals but adopt them.

Animal Friends encourages citizens not to eat meat and food of animal origin at least one day a week, to start with vegetarianism or even better to become vegan straight away and therefore save many animals and look after the environment and their health.


More information can be found at www.vegan.hr. 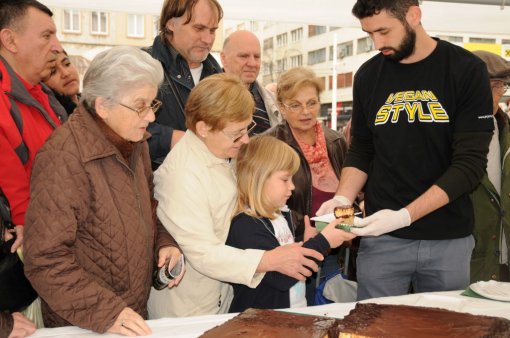