On Thursday, October 10 at 7 P.M. in the Iskon internet center in Preradoviceva ulica there will be a promotion of the web site, hosted by Iskon.

www.prijatelji-zivotinja.hr is an official site of the Animal Friends, animal protection and rights organization, which promotes vegetarianism as an ethical, ecological, and healthy way of life.

On the web site you can find a lot of texts, articles, studies about animal rights, vegetarianism, ways to protect animals, but cruelty on animals in everyday life. Photos and video galleries of animals in fur, food, pharmaceutics, amusing industry. Everything is covered, from circuses, laboratory experiments, hunt, fur, fishing, zoos, slaughter houses, and everything where innocent animals suffer and die.

There is also a free notice where you can find abandoned and lost animals, or even someone to take care of your pet while you're away.

Jokes, cards, films, fun forums and other are part of the entertainment on the site.

You can find information about the actions which will happen, or which already happened and campaigns of the society. There is also a possibility of signing in and becoming a member and many on-line petitions.

The page counts all your visits every time. Around five thousand people visit the site every month, which only says that the interest for protecting animals grows every day.

On Thursday at 5 P.M. a public promotion of the web site will take place in the Iskon Internet center which will be another way to help protect animals and ecology in Croatia. 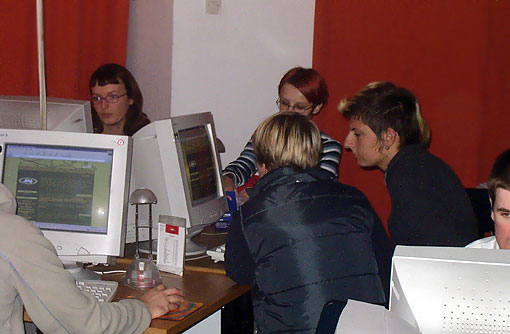