05/06/21 A calf rescued from an earthquake enjoys freedom!

- Support the Farm, hang out with pigs and donkeys, adopt dogs and cats, help with donations

In a pile of unfortunate news about the sad fates of animals from the area affected by the earthquake, at the beginning of the year, Animal Friends Croatia cheered everyone up with news that the volunteers of the Victory Association saved three pigs and the pregnant cow Šarava. Shortly afterward, Šarava gave birth to Borna, the first calf in Croatia born in the wild, in the safety of the Farm shelter in Našice. The irresistible boy with long black and white eyelashes, who will soon be four months old, wins all hearts, and with his cheerful personality, he delighted Animal Friends Croatia activists who recently visited the Farm.

"In our work, we are exposed to knowledge about the horrors that animals suffer every day, which leaves a strong emotional mark on us. From discarded kittens and puppies dying because people don’t castrate the animals they care for to pouring chemicals into the eyes of rabbits in experiments or slaughtering innocent lambs - these are all scenes and painful fates of animals that hit us hard. Watching happy and beloved animals in the shelter fills our batteries and gives us hope for the possibility of change ", point out Animal Friends Croatia.

Hope and the opportunity to live until natural death is truly the most valuable things that not only Šarava and Borna got at the Farm, but also the billy goat Hopy, pigs, ponies, donkeys, chickens, geese, goats, dogs and cats. To all of them, the rare lucky ones in freedom, the refuge is salvation, a happy place where they enjoy each other’s company and apples, carrots, pumpkins, lettuce and other treats given to them by activists.

Here, for the first time in eight years of her life, Šarava got the opportunity to experience motherhood with Borna: “She has been following him carefully since birth and is now relaxed enough and trusts that no one will take him away from her as was the case with her earlier children. Borna is obviously growing, and horns of different colors are already sprouting. At Farmica they say that he is curious, playful and sociable and spends his time in the company of other animals. He is not aware that other calves his age will soon end up in the slaughterhouse as veal. ”

Many residents of the Farm were saved from the sad fate of most animals bred for food, which after a short and cruel life experience death in agony. With equal love, Farm takes care of about 60 dogs waiting for adoption: “When we look into the eyes of a dog and the eyes of a pig or a calf, we see an equally strong will to live, we observe social individuals with pronounced personalities. We invite everyone who has the conditions not to buy animals, but to adopt one of our beautiful dogs and cats. Also, we are currently collecting donations for the renovation of the roof of the hangar in order to make room for cats and permanently remove asbestos from the masonry dwelling, and the construction of a new dwelling for Borna is in progress.”

Borna particularly likes a three-year-old billy goat Hopy, of wonderful and mild nature, who, due to the horrible conditions in which he lived before Farm, can no longer walk on his own. For special prostheses that will help him walk, as well as for other costs of Farmica, the smallest donation to the account number of Farmica will mean a lot: IBAN: HR5923400091110916596, SWIFT: PBZGHR2X, PayPal: farmicanasice@gmail.com.

Animal Friends Croatia reminds us that countless animals live in crowded spaces where they can't even turn around and end up in slaughterhouses. "Anyone who wants to help correct this injustice can do so by switching to a vegan diet, which can be helped by a carefully designed Vega challenge at www.veganopolis.net. A person on a vegan diet can save as many as ten thousand animals such as Borna, Šarava, Hopy and many others during their lifetime ", concluded the Association. 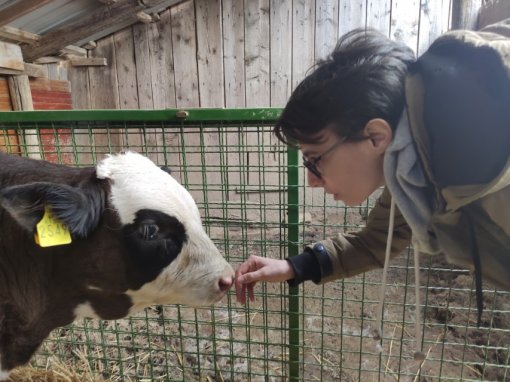