Flying the Vegan Flags in Croatia

World Vegan Day is an event celebrated worldwide on November 1. It was established in 1994 to promote the ethical, health and environmental aspects of veganism.

The inspiration behind the vegan flag was nature preservation, love, respect, and compassion for all beings, regardless of the species, as well as sustainability. The green colour represents land animals, the blue stands for sea and sky animals, whereas white is a symbol of unity. The letter V is the first letter of the word “vegan,” and the inverted pyramid is a symbol of every individual’s capacity to make positive global change.

Animal Friends Croatia believe that promoting vegan flags in Croatia is an important step in the strengthening of a movement that aims at general well-being, while contributing to the environmental awareness of cities and their image as tourist destinations. For this purpose, they initiated a long-running project of displaying and promoting vegan flags on World Vegan Day.

On November 1, 2020, twenty-two vegan flags were displayed at the busiest and most popular points in Zagreb. For twelve days, the flags were flying at Ban Josip Jelačić Square, Republika Hrvatska Square, Žrtava Fašizma Square, Kralj Tomislav Square and Roosevelt Square. In addition to the flag displays, Meštrović Pavilion, and the fountains in front of the National and University Library were illuminated with vegan colours.

Responsibilities of vegan flag representatives include:

– action needed to obtain permission to display vegan flags in their city, in cooperation with campaign promoters, Animal Friends Croatia

– delivery of flags to point of display

– collecting the flags when removed from the mast

– flag storage until the following year

– assistance in fundraising for flag production

Vegan flag representatives are proud of their roles and tasks, and they have been managing them with great responsibility. They are aided by the Project Promoter and the Chief Project Co-ordinator.

As the vegan flag project is ongoing, we are also looking for new representatives in cities where flags have not yet been displayed. We hereby call on anyone interested to contact us.

In addition, we are currently raising funds for making flags – any contribution is highly valuable. We ask anyone able to help to donate according to their wishes and means. Instructions for payment can be found HERE. Many thanks in advance!

One flag displayed at Samobor entry point and three flags at the old military barracks, the so-called Bunker.

Ten flags displayed in the city centre on the Jean-Michel Nicolier Bridge.

One flag displayed at Narodni Square on Gradska straža. 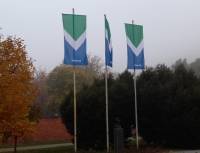 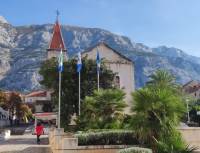