Brown piglet with a "white shirt" calls for a Veggy challenge

After the popular and favorite Croatian Super Ljilja, another pig catches attention with its cute appearance and demeanor. From Serbia comes an interesting story about the rescued pig Spasa, whose adventures can be followed on the rescue page of the piglet Spase. A brown body with a white pattern, Spasa looks like she is wearing a shirt, and given that she easily befriends cats, dogs, and humans, it's obviously a real charmer.

Saved from the farm, Spasa has avoided a cruel fate and, instead of getting slaughtered, has a life and a career ahead of her. She was immediately awarded the title and assignment, side by side with this year's Veganuary ambassadors - vegans Joaquin Phoenix, Alicia Silverstone, Mayim Bialik, Danielli Monet and Evanna Lynch - and invites everyone to sign up for the Veggy Challenge through www.veganopolis.net.

A student and a professor at the Faculty of Veterinary Medicine in Belgrade have taken it upon themselves that Spasa, who is not even two months old, does not end her life like all other members of her species. She currently lives in an apartment with dogs and cats and has slipped under everyone's skin. She is lovely and, like any child, full of love and desire for attention, exploration, and play. He loves society, often running after the person he chooses as his own at that moment and draws his attention to himself by leaning like a puppy on his hind legs.

She wants to be involved in everything, and soon everyone in the household realizes that there is no difference between her, dogs and cats and that she becomes an equal member of the family. He is fascinated by his tricks, his intelligence, and his special personality, where he has tenderness and mischief, and most of all, a great desire for life. The salvation awaits the continuation of life in a refuge, where it will have its own cottage with a large garden and numerous company.

Her seven siblings will not be so lucky. Their fate, as well as that of one billion pigs worldwide, is frightening. The suffering and pain they will endure are unthinkable, and they will lose their lives without the opportunity to grow up. They can be helped by anyone who, along with thousands of others, join Veganuary and embark on the Veggy Challenge by visiting www.veganopolis.net and signing up for a month to receive emails full of recipes, tips, curiosities and information on the many benefits vegan diets.

Veganuary is a well-known organization that calls for a change in lifestyle in January by turning to a more compassionate lifestyle through a vegan diet. The total number of participants is steadily increasing and the aim is to register 350,000 participants from all over the world this year. Spasa will certainly help to achieve this! 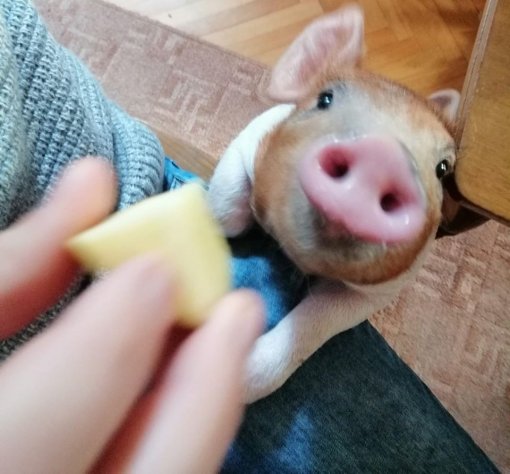