Animal Friends invites you to the annual anti-fur demo

The legal ban of breeding animals for fur, which was supported by 73,7% of citizens and which came into effect on January 1, 2007 by the Animal Protection Act with a transition period of 10 years, shows that a vast majority of citizens realizes that killing animals for their fur is a good enough reason to say no to clothes and accessories made from animal fur.

After the demos in Novi Sad, Osijek and Sarajevo, Animal Friends announces the big anti-fur demo in Zagreb on Saturday, February 20. The protest march leaves from King Tomislav Square at 11 A.M. Hundreds of loud protesters with banners will pass the centre of Zagreb making stops at fur stores in order to light candles in the name of animals killed for glamour.

After 12 noon on Ban Josip Jelacic Square the animal rights activists will hold a minute of silence and lay a wreath by the coffin with body parts of killed animals turned into fur pieces of clothing in order to condemn the mass killings of living beings for fashion and profit.

Some of the celebrities who have worked with Animal Friends before will also join the protest, and all citizens are invited to join the protest whose goal is to raise public awareness and achieve legislation changes directed to banning the sale of animal fur.

Animals bred for fur kept in small dirty cages are being killed by electrocution, gas, neck breaking, lethal pesticide injections directly into the heart and similar methods, while animals captured from the wild die for days with their limbs broken and captured in traps, waiting for hunters to skin them to attain their fur.

Animals don't have fur in order to be killed for glamour or somebody to profit from their death. Their fur belongs to them and not to humans. Animals have their reasons to live and a right to live in their own fur. Nevertheless, more than 70 million animals are killed every year for the part of fashion industry that doesn't object to using furs of skinned dogs, cats, chinchillas, foxes and other animals with whom we should share this planet.

The fur industry is ruthlessly exhausting natural resorces, poisoning water and using cancerogenic chemicals to try to make the part of a dead animal into a fur accessoires. But even that isn't enough to stop the cruel killing.

For that reason it is necessary for each and every one of us to say no to fur so that fur clothing would become a shame for everybody who produces or wears it, and that a former symbol of prestige fully becomes a symbol of cruelty, ecological unconscience and old fashion.

Killing animals for fur has no excuse and deserves to be condemned. With this protest Animal Friends not only wants to condemn the fashion industry that kills for fur but also express its demands for the right to fur-free catwalks and stores, as well as the right for Zagreb and Croatia without fur. 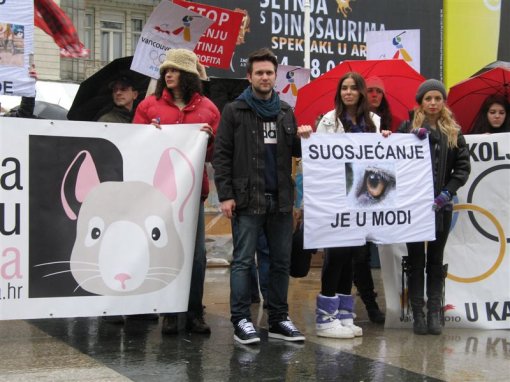