On Thursday November 22, Animal Friends held a peaceful demonstration at Josip Jelacic Square in Zagreb. The demonstration started with 15 minutes of noise as a response to a statement of the President of the Republic Stjepan Mesic regarding the bear hunt licenses on the island Krk. We urged the authorities to stop the bear slaughter on Krk and to find a better solution to the existing problem. We also wanted to inform the public about the offensive statement of the President Mesic.

During the meeting of the Croatian Hunting Alliance - to celebrate 120 years of organized hunting in Croatia - the President of the Republic Stjepan Mesic said the following: "Various stories circulate amongst those who do not know a lot about hunting, but hunting is an important part of our economics and is useful for more than one reason. It saved many animal species from extinction, and it is important as a sport and as a form of socializing between hunters from various countries. Croatia has great hunting areas, some of them are known all over the world, and hunting has positive effects on forest preservation."

We find this statement offensive towards everyone involved in animal protection and towards the majority of Croatian citizens who are called "those who do not know a lot about hunting."

In Croatia, certain animal species such as bears, wolves and griffon vultures are about to become extinct because of hunting. Excessive hunting leads to extinction of animals, not conservation. We want to get the attention of the President and the public and warn them that hunters feed and breed game animals in order to shoot them. Can it be called conservation, if they breed animals, set them free and then kill them? During hunts these animals are pursued, wounded and killed. We believe that the President should not support or promote such activities.

The above statement of the President made Animal Friends express their disagreement by organizing a 15-minute protest on Josip Jelacic Square on Thursday September 22 at 12 noon sharp. Protesters made noise on the main city square to bring the message that hunting is a cruel and bloody way of killing in the name of "sport" and "entertainment." There are about 55,000 hunters in Croatia, but there are hundreds of thousands of people who consider hunting to be unnecessarily cruel. Besides killing game, hunters also very often wound and kill dogs.

The word "sport" stands for competition between opponents with similar chances of winning. It does not stand for ambushing and pursuing innocent and defenseless animals. Hunting is a massacre, not a sport. Although in Western Europe hunting is rapidly disappearing - for example in Great Britain 80% of the public thinks that fox hunting should be banned - our President encourages barbaric and cruel killing in the name of "sport."

As a protest against the bear hunt licenses on the island Krk, Animal Friends is sending a public appeal to the Board of Section for Economical Growth of Primorsko-goranska zupanija, the President of the Republic, the President of the Government, all major political organizations in Croatia and to all mass media. We urge you to stop this slaughter!

Despite many demonstrations, petitions, requests and suggestions about the bear hunt on the island Krk, authorities decided to let hunters solve it in their own way. The authorities seem to forget how bear hunts ended up last year. Hunters used poisoned sheep corpses to poison the bears, but also killed half the population of griffon vultures who took a bite out of the sheep corpses. Croatia had the biggest population of griffon vultures in Europe, but hunters do not seem to find this important. Other countries spend millions of Euros to preserve the last few vultures, while in our country 50 griffon vultures are dead as a "side-effect" of hunting. President Mesic still claims that hunters "preserve nature and the animals."

Not only were no attempts made to investigate and punish the culprits for the horrible death of giffon vultures, but - because of the new bear hunt licenses - two criminal cases against members of the Hunting Alliance were dismissed. These hunters should have been severely punished. Furthermore, licenses to hunt on rare and endangered animal species are handed out, even though other solutions have proven to be far more efficient.

The Western countries promote eco-tourism and the "shooting" of animals with photo cameras, not with rifles. Eco-tourism has great potentials: new work opportunities, profit from tourism, but also discover nature, support environmental protection and observe animals - not to ultimately hang them on the wall as a trophy but to see them live their lives. Therefore Animal Friends promote eco-tourism instead of the barbaric and cruel hunting of innocent and defenseless animals. 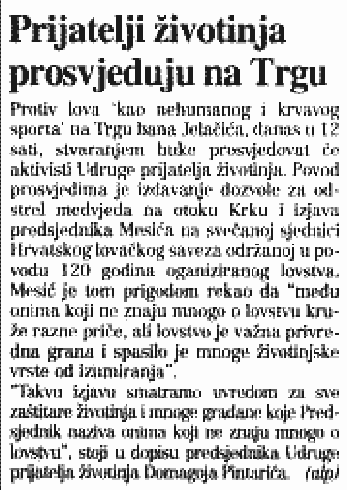