On last night's game on October 30 when KHL MEDVESCAK played against Austrian Klagenfurt a large banner saying ''ANIMAL FRIENDS ADORE BEARS'' appeared on the grandstands in Sector B among 7,000 fans who wholeheartedly supported the Bears in Ledena hall.

Fifteen activists and supporters of the Animal Friends sent their message in order to give their support to presently most popular sports club in Zagreb and warned about brutal torture, abuse and killing of animals only for ''fashion'' purposes!

"Since I cannot play because of the injury, suddenly I noticed on the other side of the grandstands this large banner which totally surprised me! Then my friends explained the context and I was really happy! I am really glad to see that we are in some way helping the actions against animal abuse and torture. I hope that we will succeed," said John Hecimovic, attacker, who is nowadays watching the matches on ''dry grounds'' because of his injury.

Nonetheless, this action announced future cooperation between the Animal Friends and the Bears where the Bears will have a leading role. Croatian public will soon find out how the Bears shall react to this new "challenge" and invitation. 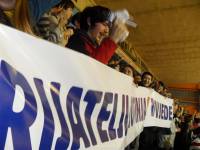