Animal Friends activists will hold a protest on Saturday, June 15, at 12 noon in Jurisiceva ulica, just across McDonald's restaurant.

On Wednesday, July 12, the three-day summit on hunger in the world ended. 7,000 world leaders, statesmen, several thousand journalists and ten thousand protesters participated in the summit. The conclusion of the summit is that at the moment nothing can be done.

Millions of people die of hunger every year, every few second a child dies, and millions of dollars are spent for organisation of the summit which should prevent it, and which doesn't produce any opinion. In fact, the solution of the world hunger is quite simple. Thousannds of vegetarian groups gathered under the name Vegetarian Union offer the solution which has been confirmed by numerous world organizations that take care for growing and consumption of the food.

As the cultivated cereal crops are not eaten directly to the people but via animals, the huge amount of food is lost and that acctually causes the hunger in the world. A person whose diet is based on meat and procesed meat spends in that way the amount of food equivalent to 20 vegetarians.

On the area of 10 hectares, or in other words on the area of 5 soccer playgrounds it can be cultivated: meat enough for two people, corn enough for 10 people, cereal crops enough for 24 people or soya enough to feed 61 people.

Vegetarian fight for vegetarianism is not useful only to animals, to our health and the environment, but influences directly the fight against hunger in the world, and by being a vegetarian the possibility for production of food and reducing the hunger is open.

Croatia, for example, has enough potential for food export, but because of the orintation on food production and meet consuming it is forced to set aside considerate funds for food import.

That is the reason we apeal for our citizens to think about the economic, ecologic, health and ethic aspect of their nourishment. 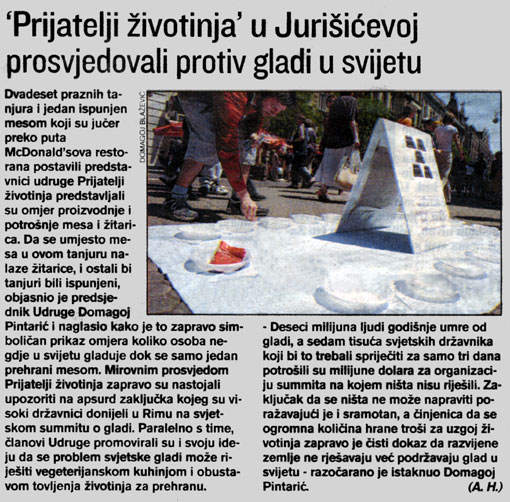