- Who will control if everyone that is heading for a killing spree called home slaughter, is keeping to instructions?

As the time has come to take animals’ lives due to people's habits, the competent Ministry prescribed instructions for slaughter. On one hand, they resemble instructions from Nazi concentration camps, whilst on the other hand leave the impression that somebody cares, i.e. as if the animals are not going to get slaughtered but after their beautiful life there is an even more beautiful place waiting for them.

It is clear that there is no humane slaughter and that animals, since birth experience, pain and suffering when bred in modern concentration camps, and they end their lives with violent deaths by brutal slaughter.

Let's put all the unkindness and insensitivity toward living beings that feel pain and have the right to a life without oppression to one side, and let's commit to the minimal conditions that are prescribed in Animal Protection Act and Veterinary Act.

Animal Friends still believes that murder in the backyard should be banned, i.e. the legislator should at least prescribe that the slaughter can only be performed by a registered expert. Unfortunately, this suggestion has been declined and instead of experts, slaughter can be performed by anyone who considers themselves to be an expert, and the published instructions should help them along. It is not known who checks if everyone has read the instructions, has sufficient expertise or is breaking the law whilst handling guns or knives.

So, the desire of whoever wants to breed and slaughter a pig himself is protected, without regard for the minimum conditions or trichinellosis which regularly visits slaughter sites. Current change to the Veterinary Act is awaiting Parliament discussion, and it will ensure that those who buy an animal with the intention of eating it will get their wish of slaughtering it themselves, by having a party in the name of this legal violence over animals. It is not known here who will control the buyers of live animals (and how they will do so) to see if they’ve read the instructions and how much of an "expert" they are.

It is unclear if we should accept the publication of these instructions for the "correct" killing of animals as progress, regarding the fact that the Animal Protection Act came into force only as recent as year 2007, and before then there was no provision about stunning before slaughtering. Or, should we conclude that there should have been, and there should be now, a law or regulation that is possible to implement to some degree and control?

According to the instructions of how to "protect" animals during the taking of their lives, blood can still be spilled in people's backyards, whilst celebrating this event as if it is the event of giving birth, and not the end of an animal’s life - to them the most precious and the only one.

With clear arguments in favour of changes to the Animal Protection Act, which should aim to rectify fairly poor and minimal animal protection, Animal Friends calls for the condemnation of blood spilling celebrations and support for a diet choice that ensures vitality, ecological sustainability to every one of us and for which no live beings suffer. 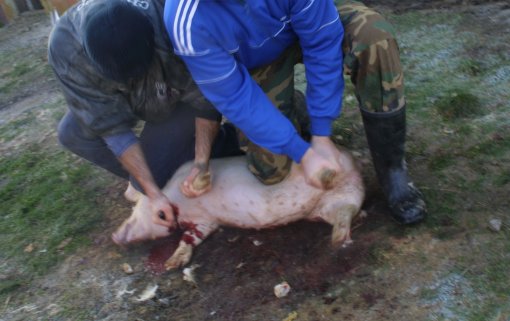